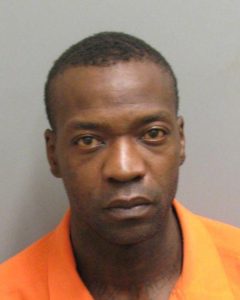 Montgomery County, Ala. – A repeat criminal offender is facing life in prison after a Montgomery County jury found him guilty of sexually assaulting a 13 year-old girl.
Patrick Terrel Stinson has been convicted of rape in the first-degree, a charge that carries a mandatory life sentence without the possibility of parole. Stinson assaulted the victim in July 2015, at a hotel near Air Base Boulevard.
Stinson has also served time in prison for first-degree burglary, rape in the second-degree, and attempted rape. He is scheduled to appear before Fifteenth Judicial Circuit Court Judge Greg Griffin on Aug. 21, 2018, for sentencing.
District Attorney Daryl Bailey expressed his appreciation to the Violence Against Women Prosecution Unit, led by Deputy District Attorneys Terri Mayweather-Jones, Michael Caddell, and John Groos for their commitment to seeking justice for the victim. He also praised District Attorney Investigators Callie Clark, John Brown, and J.P. Wilson for their work in the investigation of the case.
District Attorney Bailey said: “Sexual assault is a heinous crime that has long-term psychological and emotional effects on the survivors. I hope this conviction brings Stinson’s victims some semblance of peace as this despicable individual will never be allowed to hurt anyone ever again. Our children and entire community will be a little safer with this violent criminal behind bars for the rest of his life.”