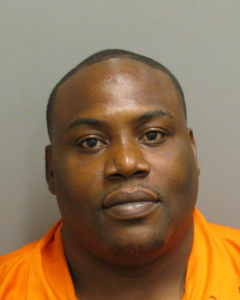 Fifteenth Circuit Court Judge Roman Shaul sentenced Osborne to 359 months (29 years and 11 months) for the murder of 30 year-old Rodrekas Zeigler. On September 11, 2015, at 4:30 in the afternoon, Osborne shot Zeigler once in the neck at a barber shop located off of Lower Wetumpka Road. According to the testimony of witnesses the Defendant attacked the victim as he was entering the barber shop.

District Attorney Bailey praised his Violent Crime Team led by Deputy DAs Justin Jones and Michele Davidson for the verdict. He also praised DA Investigator’s T.D. James and John Brown for their work in securing witnesses and providing protection throughout the trial. He also stated that he was very appreciative to the Montgomery Police Department for their hard work in the investigation of this case.

District Attorney Bailey said:  “Due to the hard work of our Violent Crime Team, the Montgomery Police Department, the witnesses and the jury, we were able to remove another violent offender from our community.  Our community is tired of these senseless murders and it is my hope this conviction and the sentencing will reinforce the message that there are extreme consequences to violent actions.”